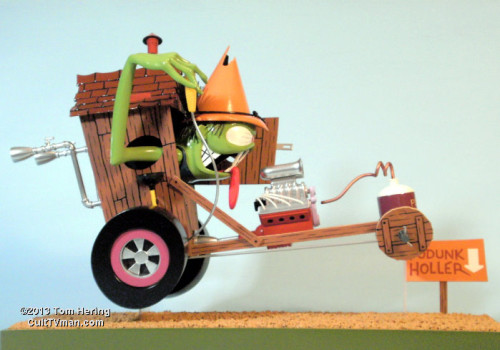 This is my finished “Huey’s Hut Rod.” The kit is Testors’ 1993 reissue of Hawk’s 1963 release.  Total time spent on this project was three months. I usually work slowly, doing just a little each day.

The goal was to make a Huey that more closely resembles Bill Campbell’s original box art. So I followed the box art’s color scheme, and custom mixed all my colors using Testors and Model Master oil enamels. The clear finishes were done with a rattle can of Testors Dullcote on some parts, and a hand brushed triple-coat of Future gloss on other parts. Almost all the paints were hand brushed as well. (The “On The Bench” article covered modifications to the kit parts.)

The base was constructed of 1/8″ ABS sheet, and painted with a rattle can of Rust-Oleum Army Green. The gravel road groundwork was made of Elmer’s glue and kitty litter (an appropriate product for the model’s toilet theme) and finished with house paint. The final touch was to show Huey airborne, just like he is in the box art, so supports were fashioned from clear acrylic sheet (cut from a cheap photo frame). These are attached to the front and rear axles.