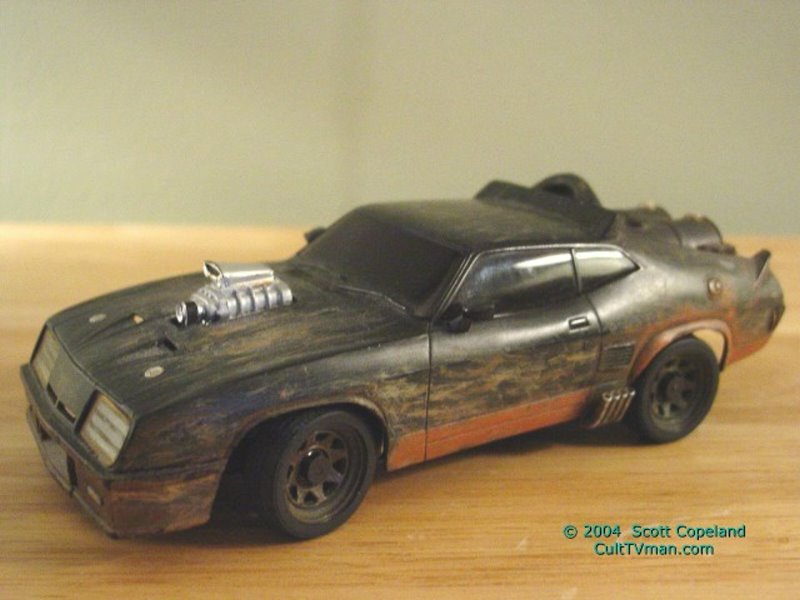 This is Aoshima’s 1/24 scale kit of the “Road Warrior/Mad Max” Interceptor that was designed to be used with a Kyosho Min-Z radio controlled chassis. It’s a pretty nice replica out of the box except for a few things I felt I had to correct to get a really cool “Interceptor”.

Apparently there are some licensing issues with the various owners of “RW/MM” rights, so Aoshima based their model on the only “real” interceptor existing today, a restored version in a car museum in England. The Interceptor was restored in a kind of bastard hybrid of the Interceptor from both films for reasons I’m not sure of. It has the glossy upper/matte lower black paint job from “Max” and the aux. fuel tanks and chopped rear end from “Warrior”, and manages to look like neither exactly. I decided to build the “Road Warrior” version because :1) I thought it looked cooler and 2)I love driving and racing Mini-Z’s and figured the inevitable crashes and dings would only give the RW version more character!

I used the DVD as reference, besides the other obvious advantages of DVD the snowless pause is one of my personal favorites. I wore out a VHS copy of “Aliens” doing a dropship and APC but that’s another story. I recreated the “muddy” weathering of the Interceptor by drybrushing it with several different shades of acrylics mixed to get the kind of orangy/red/brown clay splattered all over the car. If you compare it to the still from “Road Warrior” I think it’s pretty accurate.

The stock tires looked waaay out of scale and too skinny to me, nothing like the fat and wide tires on either version of the interceptor. I replaced them with some Kyosho thick & wide tires for a racing F-1 car that looked much more accurate. Of course they turned out to be too thick for wheel wells and wouldn’t turn freely, I broke out the dremel tool and widened the wells VERY carefully till the servos could turn the wheels easily without binding. I cut a tire from an old “American Graffiti” kit and fitted it between the rear lip of the roof and the fuel tanks to replicate Max’s. I also installed a kyosho light kit and internal antenna, these kits are awesome(albeit expensive). the headlights and tail lights turn on when you give the car gas, the tailights even brighten when you hit reverse to brake! And no Road Warrior wants a flimsy goofy looking antenna flopping in the breeze. The headlights have a nice bluish tinge to them that looks terrific when I race it and very much in scale.

I’m really happy with my Interceptor now, it looks much better and way more accurate than the stock version, plus it’s a blast to drive. While it doesn’t win many races (those fuel tanks add a lot of weight) I always get nice comments and questions about it.