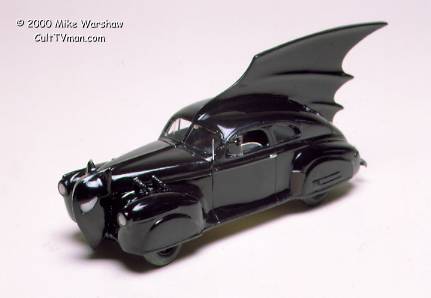 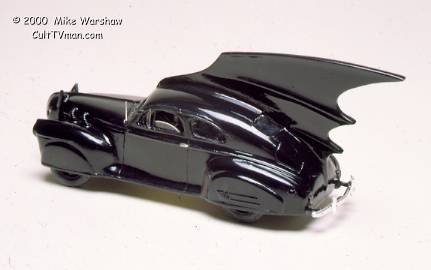 For the ’40s Batmobile, this was converted from an old, old 1/25th scale Milestone Miniatures resin kit of a 1941 Buick Sedanet; a rough kit, but with terrific aggressive lines, much better than the ’40 Fords that are commonly used. The batface is vacuformed over a mold I made by cutting off the top half of the original Aurora Batman face and building up a form below it with milliput. The headlights, Bat-eyes, dashboard, and taillights are lit with peanut bulbs. I converted two figures for Batman and Robin. (Robin is built up from the “girlfriend” in the old Revell Ford Fairlane kit; Batman is a Japanese race-car driver. There capes are made from tissue soaked in a thick solution of sprue melted into Tenax.) My next plan is to take the spare Buick I have and build the same car, but with some better detailing and with the red belt-stripe Dick Sprang used to draw (you can see it on the famous cover of Batman in which the Batmobile is bursting from the page).