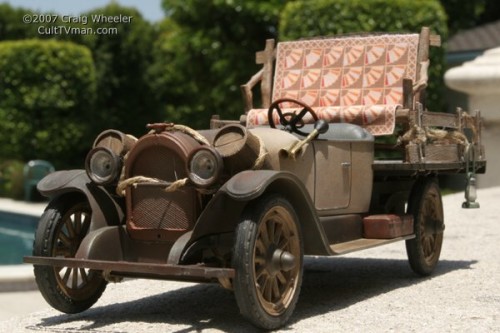 This is the AMT ERTL Plastic Model Kit of The Beverly Hillbillies Truck. It is 1/25 scale and measures just over 7 inches long. It’s an easy build. Ironically, the hardest part is painting the truck to look old and beat up.

This kit comes with parts to make either of two versions; the original truck or a hot rod version which was featured in one of the color episodes (episode 210 The Hot-Rod Truck). One of the difficulties is that the instructions reference the parts with a part number, but there are no numbers on the sprue tree! You have to go by visual only, which in itself is not hard, but it is complicated with the fact that there are going to be extra parts for the other version of the truck. Since I was building the old truck, I did not need any parts with chrome plating; so I immersed these in bleach to remove the chrome. For additional realism, I created a quilt to cover Granny’s bench. I created it on my computer using AutoCad. The pattern can be identified from several photos. I colored it and printed it on a cotton based paper used for iron on transfers. I printed two versions of the quilt (mirror images of each-other), then ironed them together, back to back. While still hot, I bent the material to conform to the bench and that was it! The model turned out very well; and I have displayed it in a plastic case suited for this scale. I printed an image of the mansion to use as a back-drop. The only color footage of the mansion that I’m aware of is from the film, Cinderfella starring Jerry Lewis.

There are a couple of books I used as references for photographs of the truck. One is titled Barris TV and Movie Cars by George Barris. The other is The Beverly Hillbillies 40th Anniversary by Stephen Cox. Also, I had bought a wonderful 8×10 photo of the truck from a website called Movie Store ( www.moviestore.com ). They feature countless number of photographs from movies and TV shows.