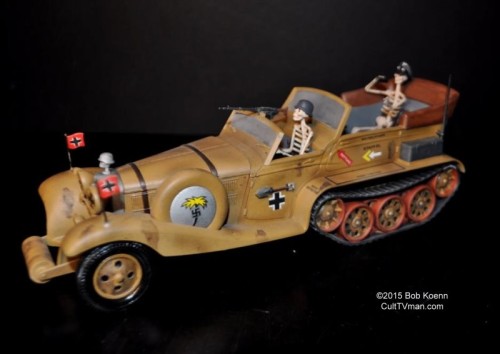 I was very happy when Monogram decided to re-release Rommel’s Rod about 5 years ago.  I definitely remembered this kit from when I was growing up and although I don’t think I ever had one back then I always wanted it very badly.  It was originally released in the late 1960s when I was really into building cars, mainly Tom Daniel’s type cars or real cars that were geeky.  I do know I had a Red Baron and a couple of others along with a couple of Ed Roth designs.  All those “geeky” designs were very appealing to build and display on my shelf.

This design by Tom was of a German desert tracked car that carried Rommel around North Africa.  As you can tell from the model design it is some years later and a dead skeletal Rommel is still being drive by his skeletal chauffeur around North Africa, what could appeal more to a 14 year old than old ghost cars?  The re-released kit is exactly the same as the original and I suspect from the same molds.  I basically built it from the box and did a paint scheme mimicking the Tom’s cover art.  It was a fairly simple build mechanically but there is a fair amount of detail painting which I did with a mix of air brushing and hand detailing.  I used a German North African color scheme with the primary color being Tamiya desert yellow.  The other colors were picked from my selection of paints to match the box colors for the most part.  The decals were excellent and really bring the kit into its own.

I notice while writing this that the kit is no longer being produced and is commanding some modestly high prices on eBay.  I wish I had picked up at least one more back when I bought this one but hopefully Revell/Monogram will run another batch in the future.  A great kit whether you are seeing it for the first time or fondly remembering it from your days of youth.